The people, issues and stories behind our research

Foundational legal research is varied in nature and touches upon real life. The twice yearly Private Law Gazette reports on research topics and presents Institute scholars along with their current projects. It portrays life at the Institute and offers an overview of current publications and academic events.

You can download PDF versions of all issues here.

If you would like to read our magazine regularly, you can subscribe free of cost. Simply send an email to plg@mpipriv.de and be sure to include your mailing address. Your subscription can be cancelled at any time.

You can read the current issue of the Private Law Gazette (in German) here: 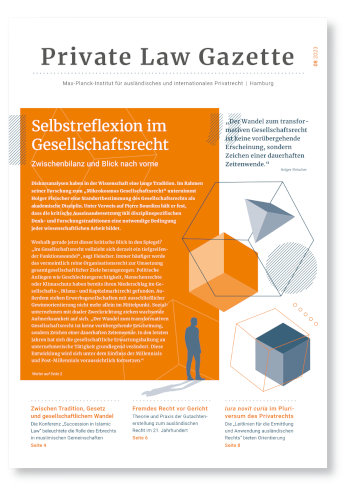 Legal Research and the Transfer of Knowledge

Private Law Gazette 1/2021 – Since the time of its inception, the Institute has put the expertise gained from basic research at the service of the general public. In 2020, a special Centre for the Application of Foreign Law was created with this very aim in mind. In this conversation with Jan Peter Schmidt, head of the Centre, we look at its experiences thus far and its outlook for the future. more

Private Law Gazette 1/2021 – Company law scholar Jennifer Trinks focuses her efforts on comparative research. She has studied in Germany, France and the USA and is conducting research in a discipline which until now has seen only few women arrive at its pinnacle. In addition, she belongs to a new generation of scholars who are committed to participation in the greater academic community and who strive to make their research accessible to the general public. more

Consciously or unconsciously, our modern world has been shaped against the backdrop of coloniality, with the result that coloniality serves as a dark flipside of modernity. Identifying and overcoming its implications has become a basic postulate in many academic disciplines. A long-term project of Institute Director Ralf Michaels looks to take similar steps in the field of comparative law. more

Ivana Isailović is co-leader of the project “Gender and Private International Law”, initiated by Institute Director Ralf Michaels. In her view, the interdisciplinary approach will facilitate the analysis of legal rules and court decisions in a wholly new light. What motivates a jurist to turn her focus to gender studies? more

They broke ground in new entrepreneurial territory, facilitated international connections and carved room for new economic sectors. The company statutes that accompanied the rise of the Medici, Fugger, Siemens and Rockefeller families paved the way for the expansion of these empires. Tested by the challenges of business practice and honed by strategically necessary adaptation, the statutes became innovative models for legal rules governing partnerships and corporations. Their authors were lawyers and jurists who, rather than endeavouring in the creation of legislation or court jurisprudence, served as consultants at the side of business leaders. more

All PLG issues in full text